The city of good living and excellence: art, culture, events, and good food.

A very old university city, Bologna is home to many students that enliven its cultural and social lifestyle.

Known for its towers and its long porticos, it has a well-preserved historical center (among the largest in Italy), thanks to a careful restoration and conservation policy initiated during the late 1960s, despite the serious damage caused by urban demolition at the end of the XIX century and by destruction during the war.

From the Amadeus Hotel, you can easily reach the historical center in a few minutes by bus, taxi, or rental car at special rates, and discover all the charm of this city.

The city, with its first settlements that date back at least a millennium before Christ, has always been an important urban center, the first under the Etruscans (Velzna/Felsina) and the Celts (Bona), then under the Romans (Bononia) and, again, in the Middle Ages, Bo-lan-yah (the dialect pronunciation that in Hebrew means: “Here lives Yahweh”), and as a free municipality (for one century it was the fifth largest city in the European population). An important cultural and artistic center, this role sometimes is difficult to attribute to Bologna, since it lacks a “masterpiece”, which can be recognized on a worldwide basis and that can attract tourists in mass. Nevertheless, its artistic and monumental importance is based on a homogeneous set of monuments and architectural innovations ( medieval towers, ancient palaces, churches, structure of the historical center) and works of art, which are the result of a first class architectural and artistic history.

Bologna is an important railway and road junction for northern Italy, in an area where important mechanical, electronic, and food industires are located. According to latest research from the European Regional Economic Growth Index (E-REGI) of 2009, Bologna turns out to be the 1st Italian city and the 47th in Europe for economic growth rate.

Bologna is home to prestigious cultural, economic, and political institutions, and also to one of the most modern convention centers in Europe. In 2000, it was the “European Capital of Culture” and, since 2006, UNESCO “City of Music”. The city of Bologna was selected to participate in the Universal Exposition of Shanghai 2010, along with 45 other cities worldwide.

> Discover offers and special rates for the Hotel Amadeus in Bologna for your trip through the charm of this lively historic city. 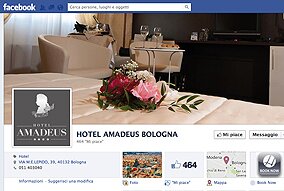 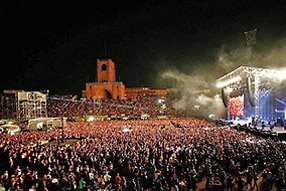